This last weekend I spent with a good friend and colleague, John Hackleman at The Pit in Arroyo Grande. He’s nuts, opinionated, incredibly goofy, and he always says what’s on his mind. We run retreats/seminars together and I often feel like he’s the crazy uncle that says way too much at Thanksgiving and sends the fam into a tailspin that ends in somebody saying, “The gravy is nice.” (“Nice” – the adjective is “Nice?” More like, “The gravy is dysfunctional – can you pass the therapy and Ding me on Southwest to get me the flock outta here!?”) However, the difference between Hackleman and the Crazy Uncle is that he isn’t subconsciously attempting to manipulate a situation to create familial havoc – he’s consciously doing so to make people better… I call that GAME.

I find that when I introduce people to him for the first time there’s always this thing going through my mind, “I hope he doesn’t freak him/her out?!” What I’ve found is that his raw sincerity and the ability to be bluntly truthful to whatever it is that he is feeling actually attitudinally disarms others! It’s brilliant to watch: Legendary coach says the most offensive thing that seemingly has nothing to do with anything. Students are confounded, confused and not sure what the instruction he is giving actually is? Moments later these very students (including innumerable UFC fighters) are training harder, more disciplined and more focused than they ever have before.

His authenticity to the moment makes him one of the most real people I know. It also makes him exceptional at what he does – training people to fight. For 40+ years he has been doing one thing – mastering the martial arts as a student, world class fighter and world class coach. If he’s coaching you, odds are you may have no idea what he’s actually saying because he mumbles endlessly (simultaneously achieving equitable levels of annoyance and charm). One of my athletes Logan Gelbrich said it best to me: “I don’t know if Hackleman is completely insane or is offering the most genius things I’ve ever heard? Usually it’s the later.” You see, he makes you, as an athlete earn the knowledge the hard way: Listen, really listen. Practice and train endlessly. And more than anything, be IN THE MOMENT. In his world, if you aren’t in the moment, you get clocked or as he says, “Get your lunch money taken.”

I’ve been blessed to have worked with masters of many kinds in many disciplines. What, in my mind, distinguishes those that are great is that they have an uncanny ability to be themselves – raw, without shame, unapologetically, and supremely comfortable with ALL outcomes regardless of result when doing their life work. Hackleman has had as much success as one can to be considered great in his field. Yet, in so many ways he is unbothered by all of this because it always comes back to the same thing. Being real. He is a great reminder to me that as soon as I try to be someone that I’m not, I get out of the moment, effectively suck, and generate negativity out of the insecurity of not being myself – a waste of my precious time here as a father, coach, comedian, auctioneer, and papa bear to this positivity project. So here’s to you Hack – as ridiculous as you, are for confirming that which I already know but always need work on: Stay in the f’n moment and be me, breathe when stuff gets cooky, take the hits when I have to and get up when I get knocked down. BOOM! 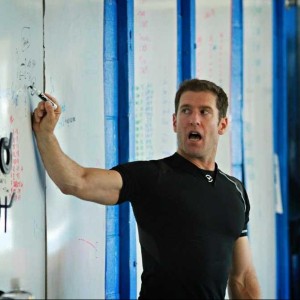 771 Responses to “John Hackleman: In the moment”